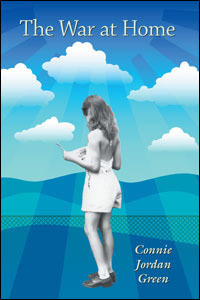 When Mattie's cousin Virgil comes to live with her family, she must learn not only to adjust to the strange new city where her family has moved but also to figure out how to get along with her most aggravating cousin.

The War at Home is available in soft cover from Tellico Books imprint of Iris Publishing Company.

The War at Home

It is 1945 and on the radio and in movie newsreels, Mattie learns about World War II and the distant lands where the battles are being fought. But she has her own battle at home, first in adapting to the strange new city of Oak Ridge, Tennessee, where her father has taken a job and she, her parents, and her younger sister have settled. The fenced town was built in connection with a mysterious project the United States government is working on as a part of the war effort. To add to Mattie's troubles, her cousin Virgil comes to live with the family while their grandmother, with whom he usually makes his home, recovers from a bout of rheumatism. By war's end in August, 1945, Mattie has not only learned the secret of Oak Ridge but also several secrets about herself and about getting along with others.

The War at Home was selected by the American Library Association for inclusion on their 1989 list of "Best Books for Young Adults," by the New York Public Library as a "Book for the Teenage," and was nominated to the 1991-92 Volunteer State Book Award Master List, a program sponsored by the Tennessee State Library Association.

"Set in Kentucky and Oak Ridge, Tennessee, during World War II, the novel is the story of the McDowells, an extended Southern family whose various members, though physically distant, stand by one another during times of crisis. ... The low-key narrative keeps within the bounds of its historical context, and the characterizations are deft and engaging." The Horn Book

"The heart of the story [told in The War at Home] is the prickly but caring relationship between Mattie and Virgil, and Green shows a fine hand in developing the sparks between the two characters, sparks that generate the story's essential warmth. The war climate emerges in background details and occasional incidents ... though the role Oak Ridge played in building the atomic bomb becomes clear at the finish. A strong story of family ties and growing up." Denise Wilms, Booklist