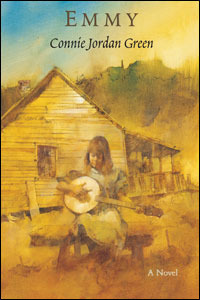 Emmy, a novel set in the coal mining camps in 1924, is available in soft cover from Tellico Books imprint of Iris Publishing Company.

"Green's story of a Kentucky family in 1924 is simply and beautifully told. The Mourfields do what is necessary to survive and persevere in spite of the restrictive, exploitative environment of a company mining town, and readers will be moved by Emmy, her joy in the simple pleasure of soaking in the creek and her sadness at her father's anger and frustration." Chris Sherman, BookList

When eleven-year-old Emmy Mourfield's father is injured in a coal mining accident, her mother, along with Emmy and her brothers and sisters, must find a way to feed themselves and to stay in the small miners' cottage the company owners plan to evict them from. Emmy wants her father's happy spirit restored as well.

Emmy was chosen as a Notable 1992 Children's Trade Book in the Field of Social Studies and was listed by the New York City Library as one of its Books for the Teen Age.

"Emmy, the eleven-year-old heroine of this gritty novel, faces tremendous hardship after her father loses his arm--and his spirit--in a mining accident. Green skillfully creates a convincing picture of the horrors of a system that allowed a disabled miner to be evicted from a company shack, but she also details the small pleasures of childhood in the mountains. A gripping and powerful novel." The Horn Book

"The author of The War at Home ... moves back a generation to early union days in the coal country. At 11 Emmy--middle of six--is her mother's mainstay [while] Pa lies querulous in the front room. ... [D]espite their realistically portrayed troubles, this warmhearted family struggles against the odds. ... An old-fashioned story--with lively escapades, problems resolved, and problems endured--but also a believable picture of good people making the best of hard times." Kirkus Reviews

"Life in a Kentucky mining town in 1924 is harsh for the Mourfield children. Pa's permanent disability from an accident in the mining shaft has resulted in the family's need to work by providing meals to coal company employees. ... The physical hardship is aggravated by the family's emotional stress brought on by their father's extreme depression. Through it all, Emmy emerges as a strong-willed, mature young girl determined to carry on. ... A descriptive view of the time period and lifestyle, conveyed with poignancy." School Library Journal

"This grittily unsentimental depiction of life in a 1920s Appalachian coal mining town ... offers modern readers plenty to reflect upon. ... Green refrains from editorializing and, in letting her characters speak for themselves, deftly shows how a brave and loving spirit can empower and ennoble the otherwise humble and downtrodden." Publisher's Weekly