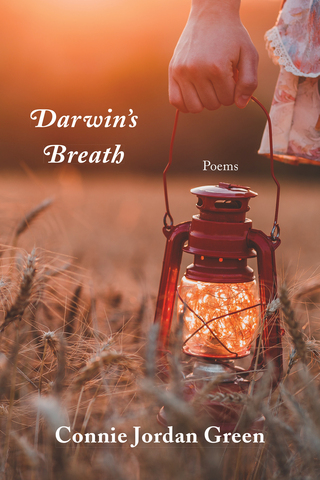 Fireflies and rocks, gardens and houses--the poems in Darwin's Breath are of the earth and universe, of everyday and extraordinary, poems about what it means to be alive.

In Connie Green’s masterful new collection, her poems achieve an amazing task, placing one’s own life relics into the billions of years of design by the creative force of the universe. Although the three sections of the book are different, they merge through the power of landscape, family, seasons and a girl growing up in Appalachia, soon learning of a woman’s work. The sections join earth’s complex existence in Darwin’s Breath to Green’s own personal life evolution. Throughout the book, her poems blossom with painterly, lyrical, sensory passages, enough to fill a treasure chest. Connie Green’s adoration of those who left beliefs shaped by depression, war, work and the marvel of the natural world, creates a transformative effect, teaching the reader an important truth, that in a contemporary society where new means better, we must celebrate frugality, labor and sharing as sacred acts. She quotes Maxine Kumin at the beginning of “Parsimonious,” Saving is a form of worship. No matter the age of the reader, these poems will bring her home again, to a heritage of sacrifice for the common good, which we must continue to celebrate, treasure until only moonlight/and the whisper of an owl’s/wing measure out the rhythm/of our grateful hearts. ---Bill Brown

The poems in Connie Jordan Green’s collection, Darwin’s Breath, remind me of the wisdom found in the work of Mary Oliver and Wendell Berry, which understands that looking clearly at the world and offering an accurate rendering of its natural processes remains the poet’s truest calling. Green offers extremely well-made poems about making, suffused with the pleasures of craft and quality work. In Darwin’s Breath, poems of science and poems of the spirit hold their own beside one another without contradiction. Both modes of understanding the world reflect the wonder we might feel at spiders coaxing their webs through thin air, or at the cosmos contained in one small rock, and turning through it all, “Memory like / a Ferris Wheel,” as in the poem “This Do in Remembrance.” Connie Jordan Green’s poems invite the reader to inhabit them, and to share in their quest for the fullness of life. ---Jesse Graves

“I think about navigation”, Connie Jordan Green writes in the title poem of Darwin’s Breath, her second full-length collection, “how there are only narrow/ ways out”. Although the attention of this expansive books stays deceptively close to home, exploring the daily occupations of the poet as she cuts “stems/ for my mother, her brain cells/like the iris rhizomes, tangled and twisted” and of the human and other animals that share her place on the Cumberland Plateau, it also reaches far out through “stars/hurling their flames/through the vacuum of space,/through the vortex of the finite” and back again through “the years a train we never/realized we had boarded” to visit her young self and to watch as “parents,/always old, we thought,/became the people we are now”. Green is a fine poet and I am happy to follow her expert navigation through the many places these poems go. ---Pauletta Hansel

Darwin’s Breath connects us to those who have come before—Neruda, Oliver, grandmothers, fathers, grapevines, and rocks. It rises “like mushrooms after rain” or “dough my mother pinched into rolls” to illustrate a lifetime of growth. A life, here, measures not in coffee spoons but tea cups, potato parings, spelling lists, and clods of broken earth—over which the gardener kneels knowing that gain is always two parts loss. ---Amy Wright

A collection of poems that move from consideration of fossils embedded in earth's oldest mountains, to memories of a childhood spent in a "secret city" during World War II, through the many gardens the poet has tended, touched always by the many people who have shared that life.